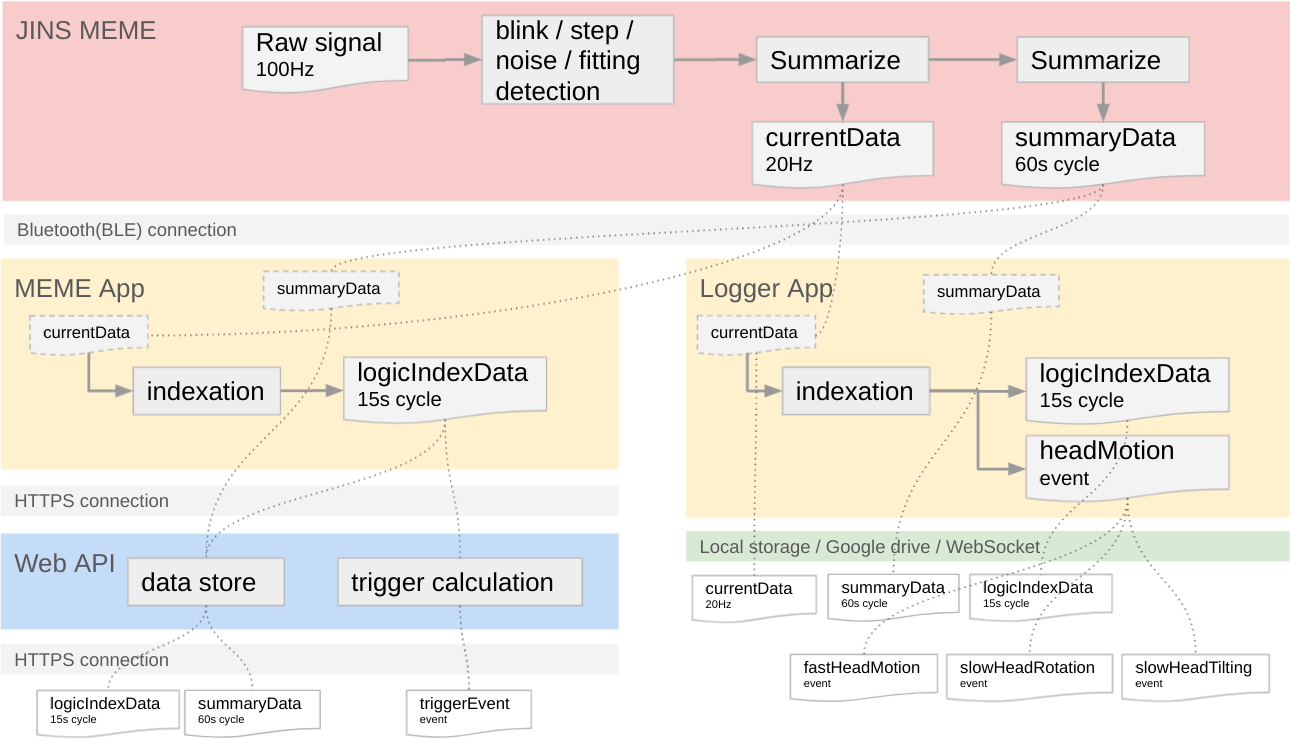 This section explains the process from data acquisition by sensors to conversion to 20 Hz data.

JINS MEME is equipped with EOG sensors to detect blinking and eye movement, and acceleration and angular rate sensors to detect movement. Each sensor acquires data at 100hz and performs the following primary detection

※Note that Special device of acquiring 100 Hz data is also available on order.

When blinking, the EOG signal has a sharp peak and overshoot as shown below. (Since the EOG signal is band-pass filtered by an analog circuit, the eye movement shows a waveform that converges gently, not in steps.) The peak height from the baseline is called the blink strength, and the peak width (time) from the point where it exceeds the threshold line until it falls below it is called the blink speed. The strength increases when the eyes are wide open or when the eyelids are opening and closing at a high speed, and is correlated with the margin reflex distance. The velocity represents the approximate time the eyes are closed (eye closure time). In the case of eye movement, the signal is a slowly decaying signal with no overshoot.

The blink detection rate of JINS MEME is more than 95% when it is stationary and there is no noise, but the rate decreases when it is not stationary or in environments where the glasses are likely to shift.

When walking or running, the following pattern occurs in the acceleration signal. The walk flag is set 0.15-0.25 seconds after the feet touch the ground.

EOG signals are measured with dry electrodes between the eyebrows and on the nosepiece. Therefore, the following EOG signals are generated when the user exercises, frowns, eats, touches or reapplies the spectacles, etc. In this state, a noise condition flag is set. The noise condition flag will remain up for about 1 second after the signal exceeds a specific signal range. It is recommended not to use the data in the noise state because the data of blinking and eye movement are buried and unreliable.

The above blink and eye movement events (0 output when not occurred), acceleration and angle are thinned out from 100Hz to 20Hz and the data is output.

When the glasses are turned upside down (about ±45°), the Bluetooth connection is disconnected and data acquisition by the sensor stops. Please note that data cannot be completely acquired in this state.

Angle based on acceleration sensor data

Angle based on gyro sensor data

The characteristics of each indicator are as follows

The total value and the number of data may be left as the basis for each indicator and calculation.

The following operations are performed when Summarize is applied to 15/60 second interval data.

Indicators used in the JINS MEME app is not disclosed.

The following operations are performed when processing indexation to 15-second interval data in the MEME app/Logger app.

The detailed calculation logic for the following indicators used in the JINS MEME app is not disclosed.

The processing of headMotion in the Logger application is as follows. The head motion event data is intended to be used to trigger a linked system via WebSocket or other means (e.g., turn on the TV when the head is shaken vertically more than 2 times, etc.). If you need time series data of tilt and movement, we recommend using 15/60 second interval data.

An event is issued when the angular velocity exceeds a threshold value. Only this high-speed head movement uses gyro sensor data, so be sure to turn on “Gyro Acquisition” in the settings before use.

Specific codes are presented below. https://qiita.com/komde/items/bd682da3d3e11aab325a

An event is issued when the angle exceeds a threshold value. This angle is less sensitive to fast vibrations within 0.5 seconds due to the weighted average.

The trigger calculation process in the Webhook API is as follows. Trigger events are calculated based on 15-second interval data received from the MEME application to the API.

Only data with isl==false (worn state) will be processed.

Weighted averaging can be applied as a simple smoothing process for indicators with rapidly changing values.

Take the AND of the following conditions and if it becomes TRUE, the trigger will actually be issued.